I’ve been away from this blog for awhile. Sometimes I’d rather just eat than write about it or take pictures of it. And yet, sometimes, certain places and people bring me a fresh salty wave of inspiration. 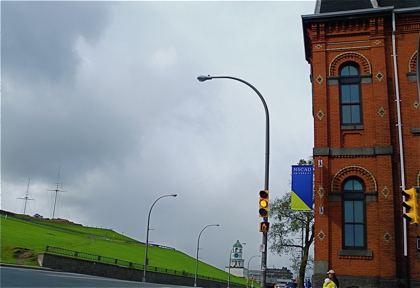 I went to Halifax last week, to promote my new book, Feeling Canadian: Television Nationalism & Affect, as well as give a lecture at NSCAD University and screen a film at King’s College. Between and around these gigs I met with friends old and new, and ate some delicious food.

Halifax is a small city surrounded on three sides by water, full of wooden-shingled building, crooked hilly streets, and graveyards. Its citizens are extraordinarily good-natured in a gruff, no-nonsense way. I lived there for four years as an art student at the Nova Scotia College of Art and Design. Walking those hills, breathing in clean salt air, I was assailed by wind, and architecture, and memory.

I had been a hippie-ish girl magically transported from the suburbs and the Ukrainian church basement, to an old world city, and a new world, avant-garde art instititution. 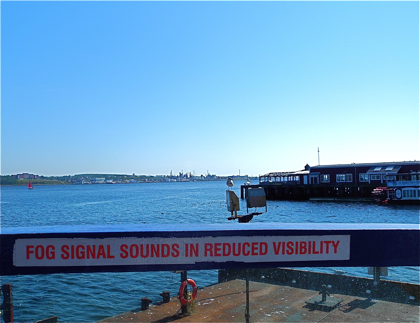 Dashing to school in the fog, a huge sketchbook under my arm, stone buildings and bronze statues escorting me there. Innocently wandering into the lesbian-feminist movement of the late 1970’s/early 80’s and feeling my life change inexorably. Discovering vegetarian food; pot; conceptual art; high theory; punk music; collective living, all at the same time. Oh, Halifax. In some ways, I – the feminist artist theorist foodie me that I am now – was born there. Like all points of origin, it is a precious place to me. 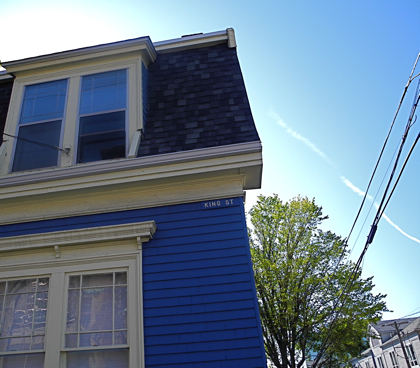 There are certain people who anchor the slippage of memory and the inevitability of change. My friends The Irreverent Academic and The Queer Artist accompanied me on last week’s culinary adventures. Let it be said that Halifax in the early 80’s was no gourmet paradise. Fish and chips and hippie food and uber-fancy old school fish restaurants were pretty much it. In fact, I did score some fantastic fish & chips from a takeout booth on the harbour. But I knew there had to be more.

And so, I managed to drag The Irreverent Academic from her brilliant philosophical writing to The Wooden Monkey, for lunch one day. I had sesame crusted haddock and brown rice in a lovely, subtle orange sauce, pictured at the top of this post. Beautifully cooked and presented, it brought flavour and style to the sometimes-bland locavore food project.

My friend attacked her roasted haddock with gusto. I was nurtured by the food, but also by the inspiration of an academic colleague so engaged in changing the raclialized and gendered politics of the university. Sometimes, we get isolated. Sometimes, we forget that there are like-minded souls in other places, doing amazing things.

The Gay Artist and I became friends thirty years ago, through a tangled network of artists and queers. As I wrote in my food memoir Comfort Food for Breakups, “he was my first gay male friend, and with his sense of dignity, social justice and giggly high humour, se set a standard for all the rest.” He lives in a century-old house shared with other artists and, though he is officially retired, makes art the way other people breathe, , which is to say, constantly, intuitively. And joyfully. 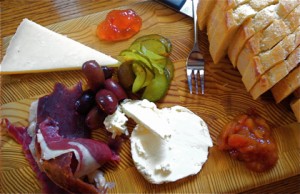 We met up at Obladee Wine Bar, a Chowhound find. Local artisan cheese! Duck prosciutto! Nova Scotia wine! Who knew? We groaned and moaned with pleasure at every bite of our charcuterie/cheese plate.

That weekend, Gay Artist took me to the Halifax Farmers’ Market, a prolific, colourful and expansive thing housed in a stunning glass-walled buliding on the harbour. Veggies and fruit yes, but also local crafts, ethnic food, patisserie, charcuterie, and oh, wineries too! We tasted local red wine, local blueberry liquer, and even local vodka.

That night, we cooked a lamb tagine and a blueberry crisp and had a kitchen party around the long wooden refectory table of the ramshackle house my friend has called home for thirty-some years. There was raucous laughter and loud argument and quiet conversation. There was strangeness and recognition and disagreement and deeply delicious food. Really, it was like coming home to a family of sisterly and brotherly discord and deep familiarity. Food brought everything into focus and made discordant flavours harmonize.

Do you have a home-away-from-home? What do you eat there?